R is for ROSENCRANTZ AND GUILDENSTERN ARE DEAD

In Act V, Scene II of Hamlet, an ambassador from England arrives to report "Rosencrantz and Guildenstern are dead."

These were Hamlet's two school chums who betrayed him to his stepfather/uncle in Shakespeare's play.

Tom Stoppard took those two inconsequential characters and gave them their own absurdist, existential story in 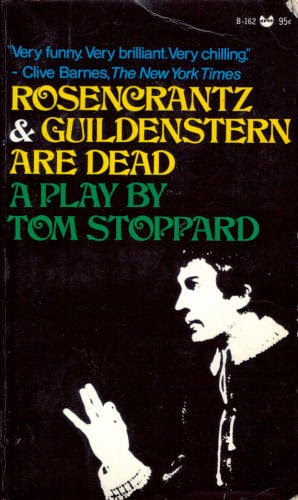 The Hamlet timeline is going on concurrently with the journey of these two hapless philosophers with their twisted, yet truthful logic.

You may know Tom Stoppard as the author of the movie SHAKESPEARE IN LOVE.

Here are a few tidbits from
ROSENCRANTZ AND GUILDENSTERN ARE DEAD:

"The colours red, blue, and green are real. The color yellow is a mystical experience shared by everybody."

"Look on every exit as being an entrance somewhere else."

TAKE AWAY -
Characters who show up as a blip in one story may have their own tale worth telling.

Has anyone seen Rosencrantz and Guildenstern on stage or the movie version?
Posted by Leslie S. Rose at 12:30 AM