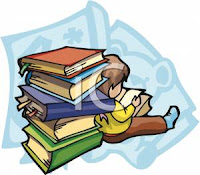 The kids in my class are reading maniacs. They have accepted our principal's challenge to read 30 books each between August and June.


When I asked what kind of books they'd like to see, here's what they told me:


I'd like to read a book about...
...a homeless boy who builds something that will be passed on for generations
...a soldier who finds an abandoned bunker filled with robots
...a frog named Andy who goes on a space adventure to Venus and meets an alien named Moe
...a modern kid lost in prehistoric times
...a talent show
...a fifth grader who solves the mystery of bank robbery in his town
...a girl who explores the Costa Rican forest
...Santa Claus and a leprechaun who are stuck in Halloween
...a funny story about the gold rush
...a fifth grader who falls off a cruise ship and gets stranded on an island
...a fifth grade boy who loses his sports ability when he makes fun of a witch in Las Vegas

Okay all you MG authors. Get writing. Can you say, "NaNo?"

If you write it, they will come.