G is for Garry Shandling


I was the assistant art director on "It's Garry Shandling's Show" for nearly three seasons. It was my first time working in television, and I had the time of my life. The show was a constant challenge to the art department as it ordered up environments such as: Shandlingland, a Garry Shandling Themed Amusement Park, A Time Machine, a ping-pong version of the movie,"The Natural," and yes, even Heaven. 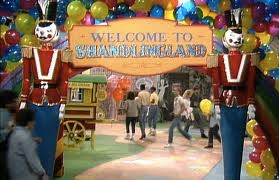 Not only did the show teach me how to design "outside the box" and in a hurry, but it was a goldmine for learning about writing. Every week I watched the script go through four, five, or more incarnations as each episode was polished to a gut-busting level of hilarity. Working on the show was a master class in the way comedy has to mesh with story development.
I love to make people laugh with my writing. Garry Shandling, I salute you, for all the lessons about humor I learned from working on your show.
Click on the Blogging From A to Z Challenge logo in the sidebar to access the links to all the superheroes participating in this blog hop.
Posted by Leslie S. Rose at 12:01 AM