The Room Where it Happens

Yes, I was finally in the theater where it happens -
HAMILTON.

A few weeks ago, I experienced this wonderful show at the gorgeous Pantages Theater in Hollywood. 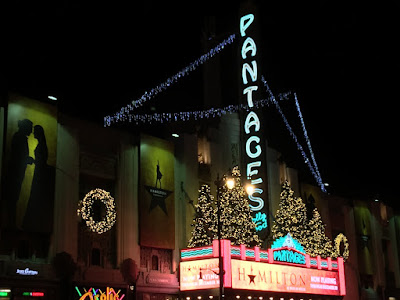 I've been listening to the CD of the show since the day it came out. I even walked by the Richard Rodgers Theater on Broadway to gaze longingly up at the marquee, dreaming of the day I would see the show. 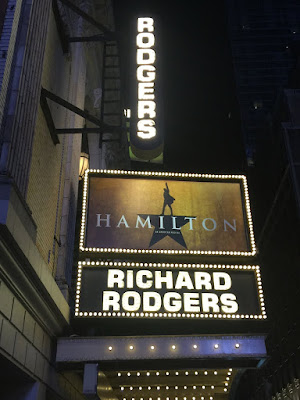 Did Hamilton live up to the hype?

In fact its awesomeness went far above and beyond what I'd hoped for.

When Washington sang "Teach Them How to Say Goodbye," I thought my heart would burst.

The lighting design was the essence of magical!

I could do endless posts on the moments and images that make this show magisterial.

And then, when I thought I couldn't be more transported by the essence of the Hamilton experience...

...Lin Manuel Miranda came out at the curtain call. I truly thought the roar from the audience would bring the roof of the Pantages down.

It's a very special time of year in the theater when audience members are given the opportunity after the show to join the ongoing fight against AIDS by contributing to
Broadway Cares, Equity Fights AIDS

Lin Manuel Miranda delivered the message about this charity that has also joined the relief efforts for those affected by the hurricanes this year in the U.S. and Puerto Rico.

Broadway Cares is very near and dear to me. I lost a brother to AIDS. He was a beautiful dancer and choreographer with a deep love of the theater.

I'm forever grateful to the theater community for carrying on the fight against this horrible disease.

If you haven't been able to score Hamilton tickets, there is a
lottery that gives you a shot at tickets. Here's the link for the
LA HAMILTON LOTTERY

There's also an app in the App Store for HAMILTON lotteries in additional cities. Hey, it never hurts to try to get into:
The Room Where It Happens