The Backworlds Series by M. Pax 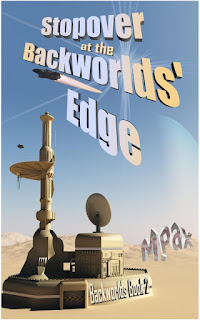 Have I got a treat for you! The second book in M.Pax's THE BACKWORLDS series is here.

Calling all sci-fi fans especially Browncoats (Firefly loyalists, of which I am one) and Star Wars nuts (Guilty as charged). This is a series for you. The main character Craze is from the same delicious mold as Captain Malcolm Reynolds and Han Solo. Need I say more? Indulge in M.Pax's universe.

The sequel to The Backworlds is now available. Craze and his friends continue their adventures in Stopover at the Backworlds’ Edge. See what role chocolate plays in the galaxy this time.

The interstellar portal opens, bringing in a ship that should no longer exist. A battleship spoiling for a fight, yet the war with Earth ended two generations ago. The vessel drops off a Water-breather, a type of Backworlder thought to be extinct. She claims one of Craze’s friends is a traitor who summoned the enemy to Pardeep Station. A betrayal worse than his father’s, if Craze lives to worry about it.

Available for all ereaders from:

If you haven’t read The Backworlds yet, it’s available as a free read from many outlets. See HERE for links. [http://mpaxauthor.com/the-backworlds-series/backworlds-the/]

Inspiring the words M. Pax writes, Mary spends her summers as a star guide at Pine Mountain Observatory in stunning Central Oregon where she lives with the husband unit and two loving cats. She write science fiction mostly and has a slight obsession with Jane Austen. Mary blogs at http://www.mpaxauthor.com/blog/

In other news:
FREE FREE FREE
The Kindle version of JOURNEYS OF WONDER, Volume 1, is available for free download until Tuesday, July 24th at midnight from Amazon.
Posted by Leslie S. Rose at 3:05 PM